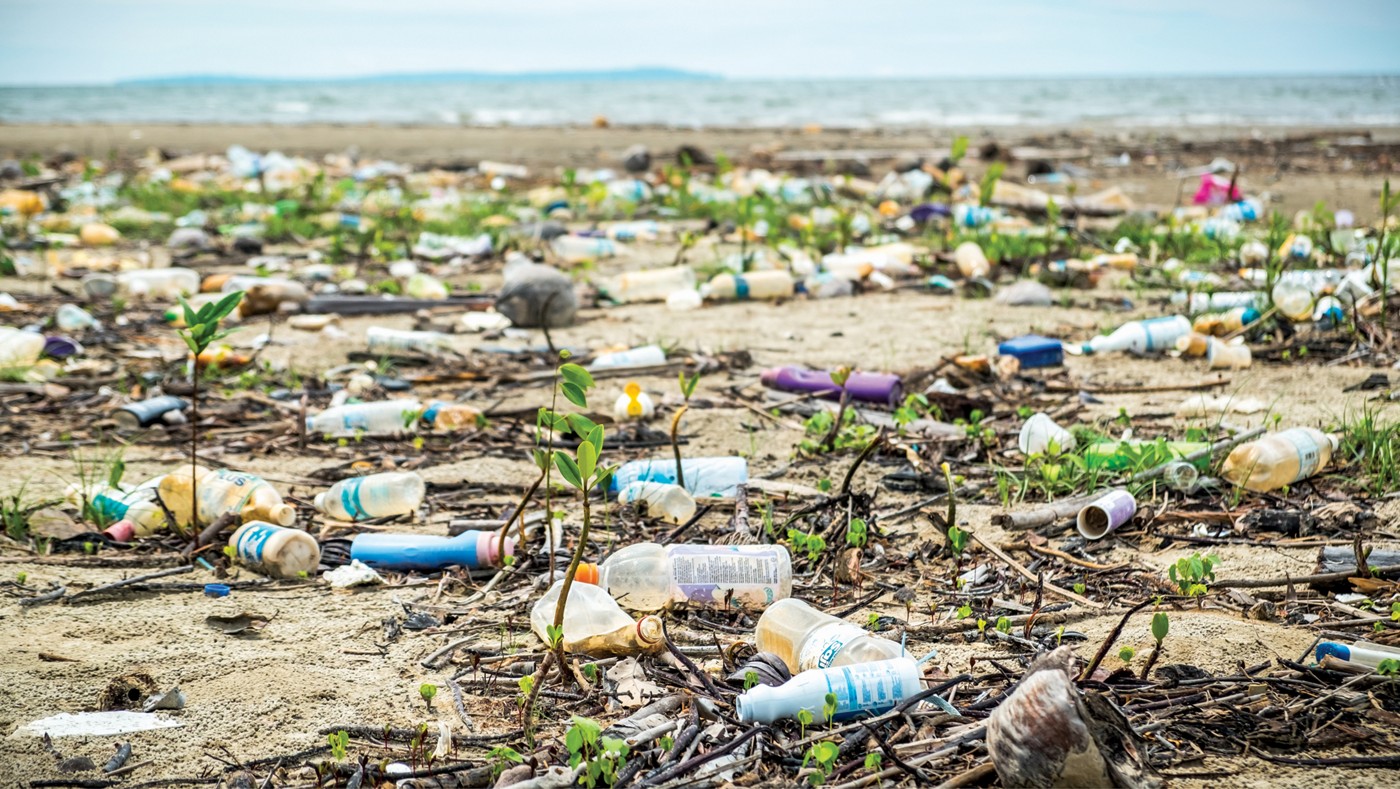 Plastics tend to constitute an estimated 10% of total household waste, most of which are disposed of in landfills.1 Plastics are made of a wide variety of synthetic and semi-synthetic organic substances, which allow for various molded objects and shapes. Due to the multiple uses and durability of plastic, production is high; in 2009, 230 million tonnes of plastic was produced in the European Union.1(702) 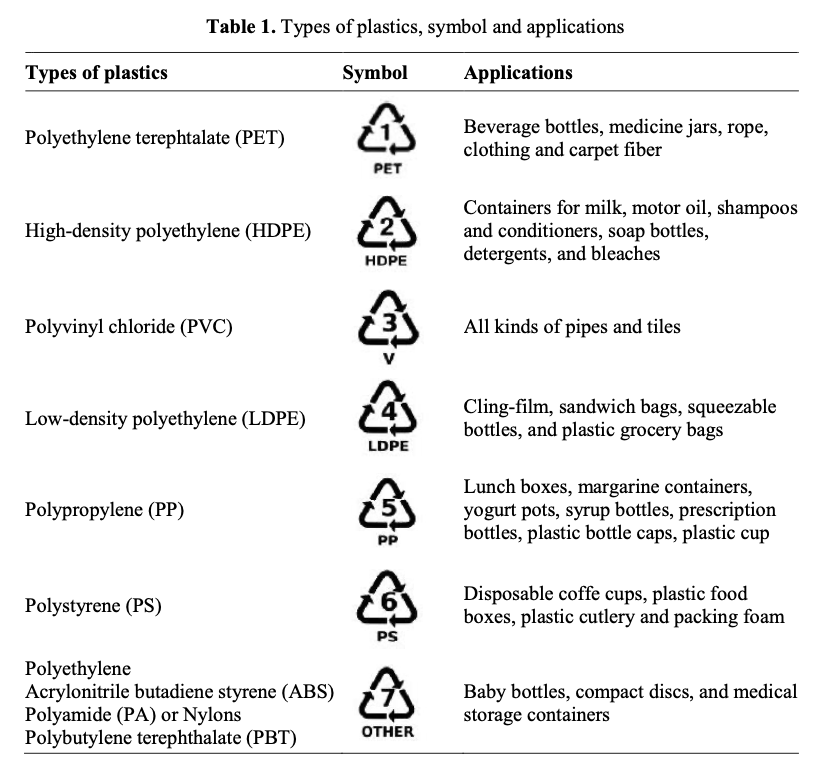 Plastics are seemingly ubiquitous in our environment, due to their versatility, to include food packaging, personal care products, disposable medical equipment, and other technological devices.2 Plastics can be broken down into 7 major types according to Martynis et al3 (Please see image above).

Plastics can also form debris, or microplastics (MP), defined as plastic particles that are smaller than 5 mm in diameter.2(1) MPs that are intentionally released in the environment are considered primary, while MPs that are released as a deterioration process of plastic are considered secondary.2(1) 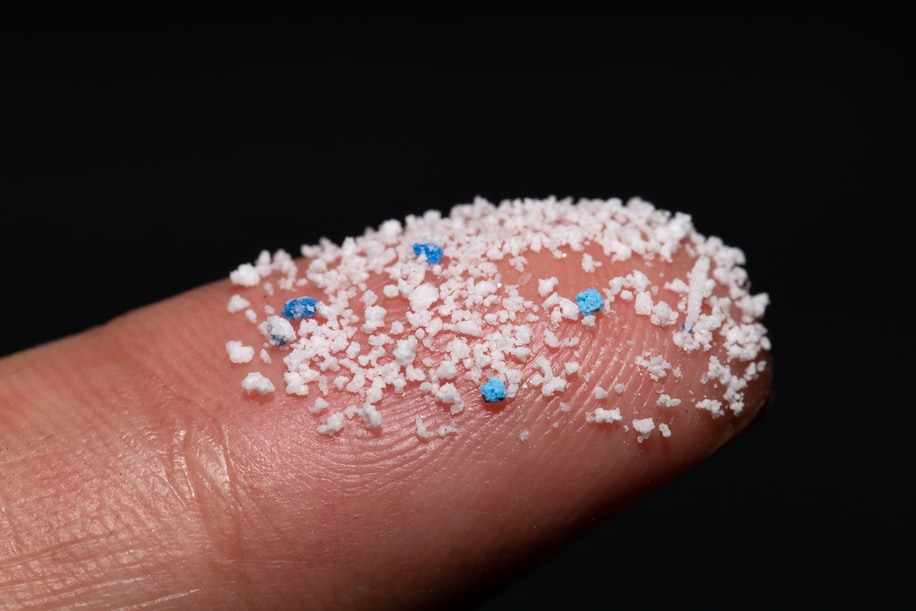 Examples of primary MPs include abrasives and microbeads in personal care products. Primary MPs also occur during the production of plastic materials.2(1) Secondary MPs can include the deterioration, improper disposal, and fragmentation of larger pieces of plastic such as vehicle exhaust, plastic films, and plastic garbage.2(1) 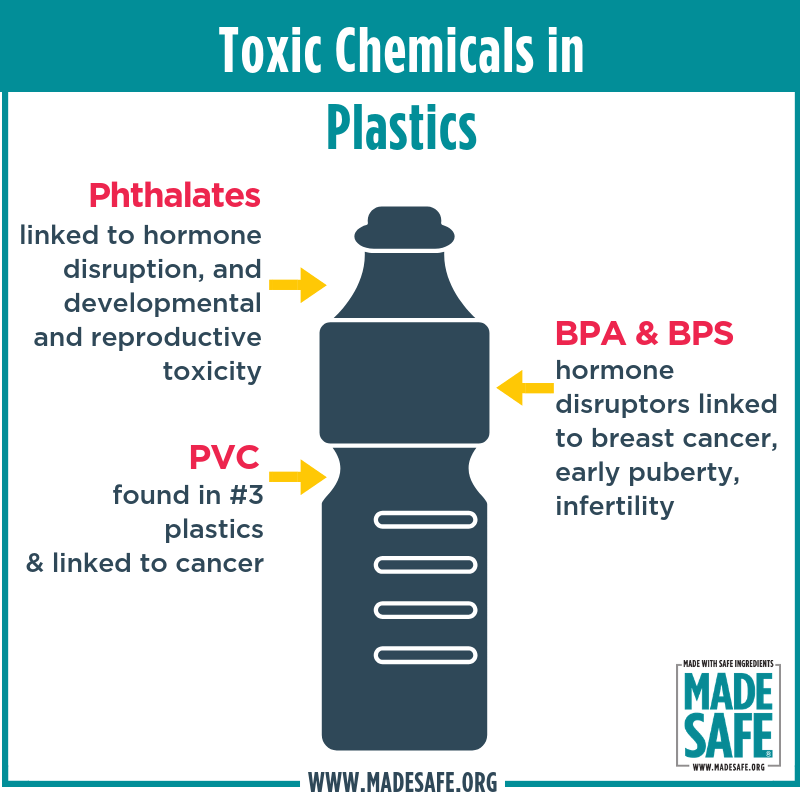 WHAT IS IN PLASTIC?

Plastics, such as those found in food packaging, contain a myriad of chemicals; at least 148 substances exist, and are all considered hazards for humans and the environment.4 Such substances include bisphenol A (BPA), bisphenol S, bisphenol F, di-(2-ethylhexyl) phthalate (DEHP), and nonylpehol.4(2,3) 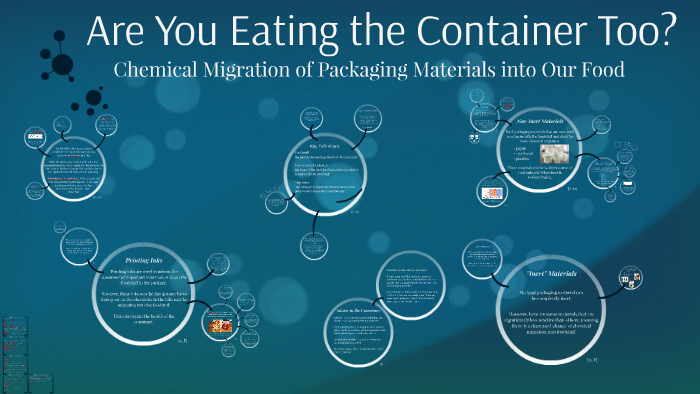 HOW CAN PLASTICS SPREAD?

MPs, discussed previously, are also problematic as they allow for entry into individuals via inhalation.2(1) Considering that MP particles quite small in mass, winds can carry them considerable distances (thousands of miles); a process that ultimately contaminates animals, humans, marine life, freshwater, drinking water, food, the atmosphere, and agroecosystems.5 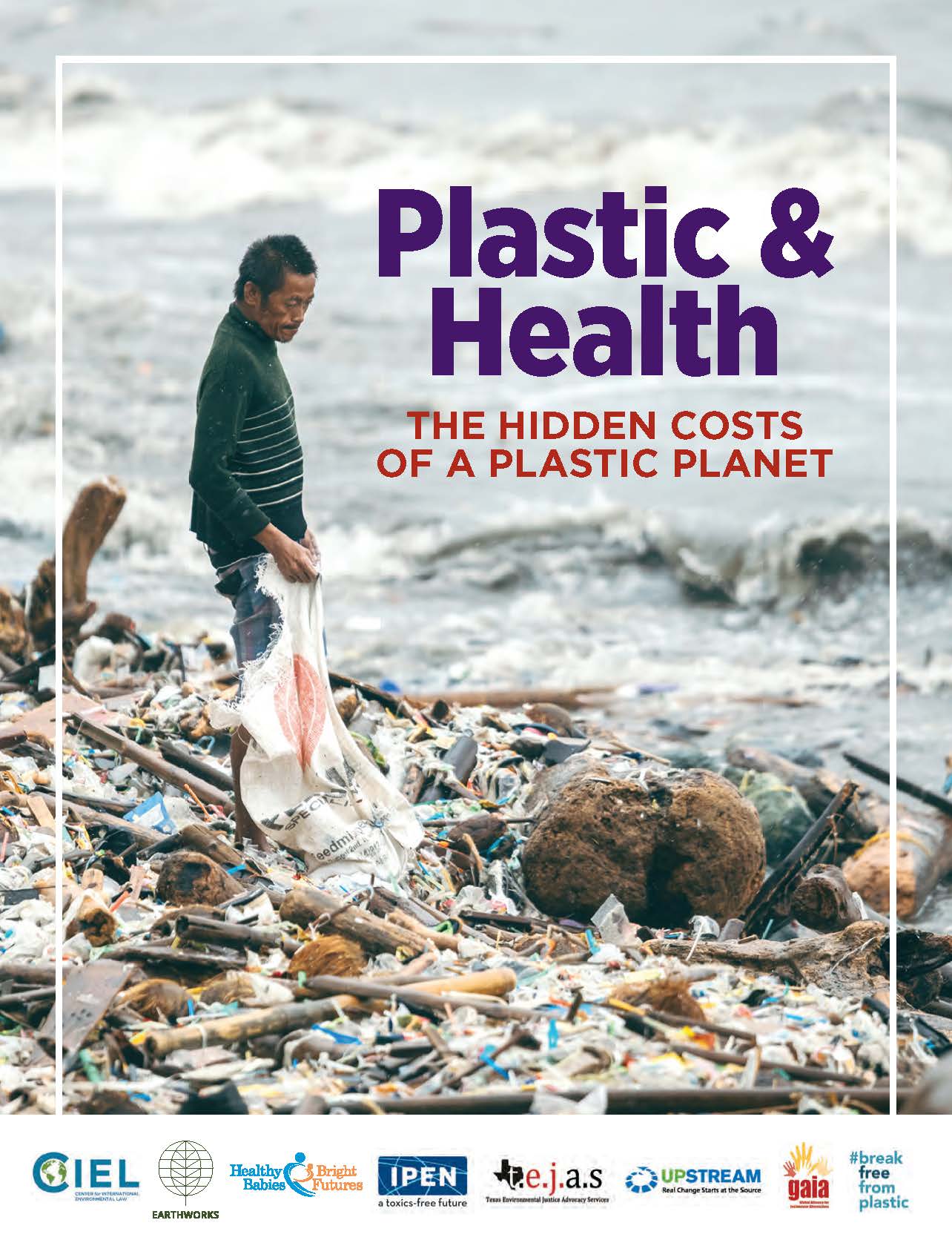 WHY ARE PLASTICS AND THEIR DERIVITIVES A HEALTH CONCERN?

Plastics (like MPs) contain chemicals, which improves the quality (color, transparency) and durability (resistance to degradation) of the product. Such chemicals are considered additives to include flame-retardants, dyes, lubricants, antioxidants, plasticizers, and fillers.5(3,4) Furthermore, MPs also absorb chemicals from the surrounding ambience (i.e., heavy metals, pathogens).2(17),5(4)

Plastic additives become problematic since many of them are classified as hazardous, though they continue to be implemented in products for human use.5(5) BPA (helps impart rigidity to plastics), discussed previously, and pthalates (chemicals used to enhance the pliability, and flexibility of plastic) are known endocrine disruptors; agents within plastic that interfere with the production, secretion, transport, and general function of hormones.6 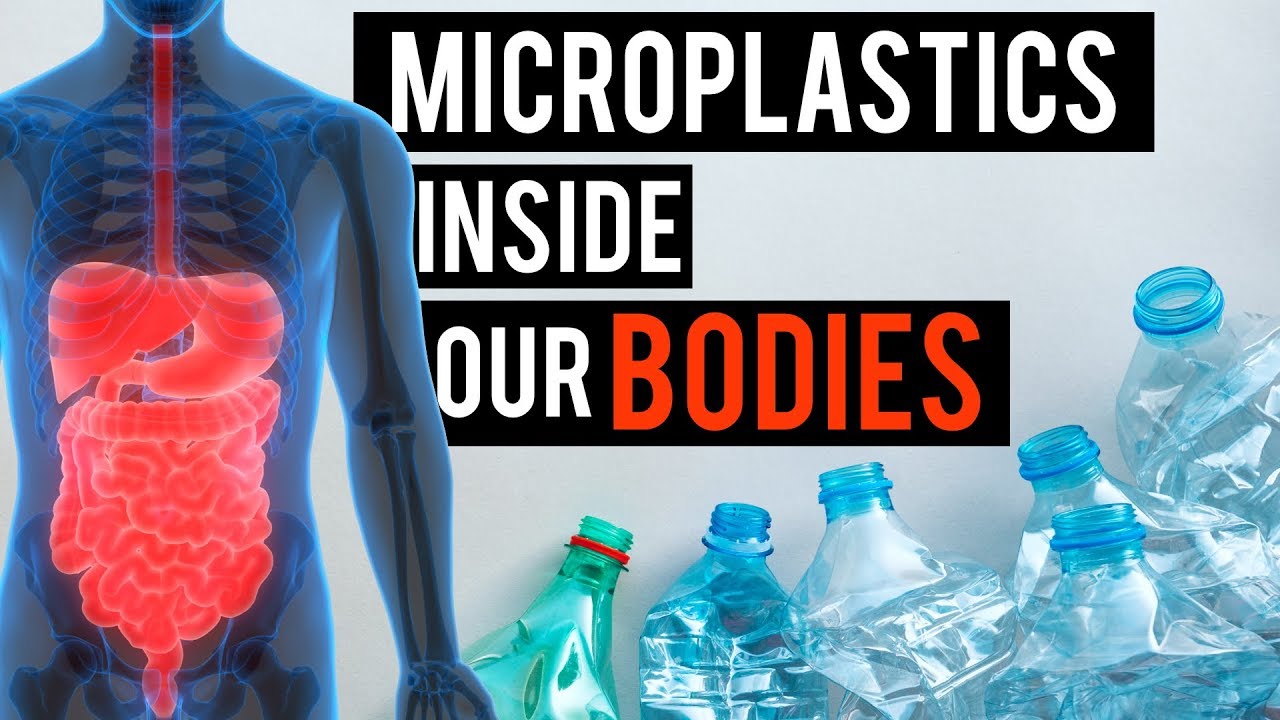 Plastics, like MPs, can induce inflammation and genotoxic (damaging DNA) effects. Cell cultures have also shown oxidative stress, mitochondrial dysfunction, lysosomal dysfunction, and apoptosis (cell death) upon exposure to MPs.2(16)Negative health effects may likely widen in scope when such plastics are incinerated; burning MPs, and plastics in general, release toxic gases and other harmful substances into the air, ground, and water.1(701)

Burning plastics such as polyethylene (i.e., baby bottles), polypropylene (i.e., plastic cups, lunch boxes), and polystyrene (i.e., packaging foam) not only release large quantities of carbon monoxide; incinerating plastics also release heavy metals (often used as flame retardants in plastic) such as cadmium/lead/barium as well as selenium, cobalt, copper, and chromium into the air.1(703,704) Please see an article that I wrote previously on heavy metals, health consequences, and solutions in managing the same: 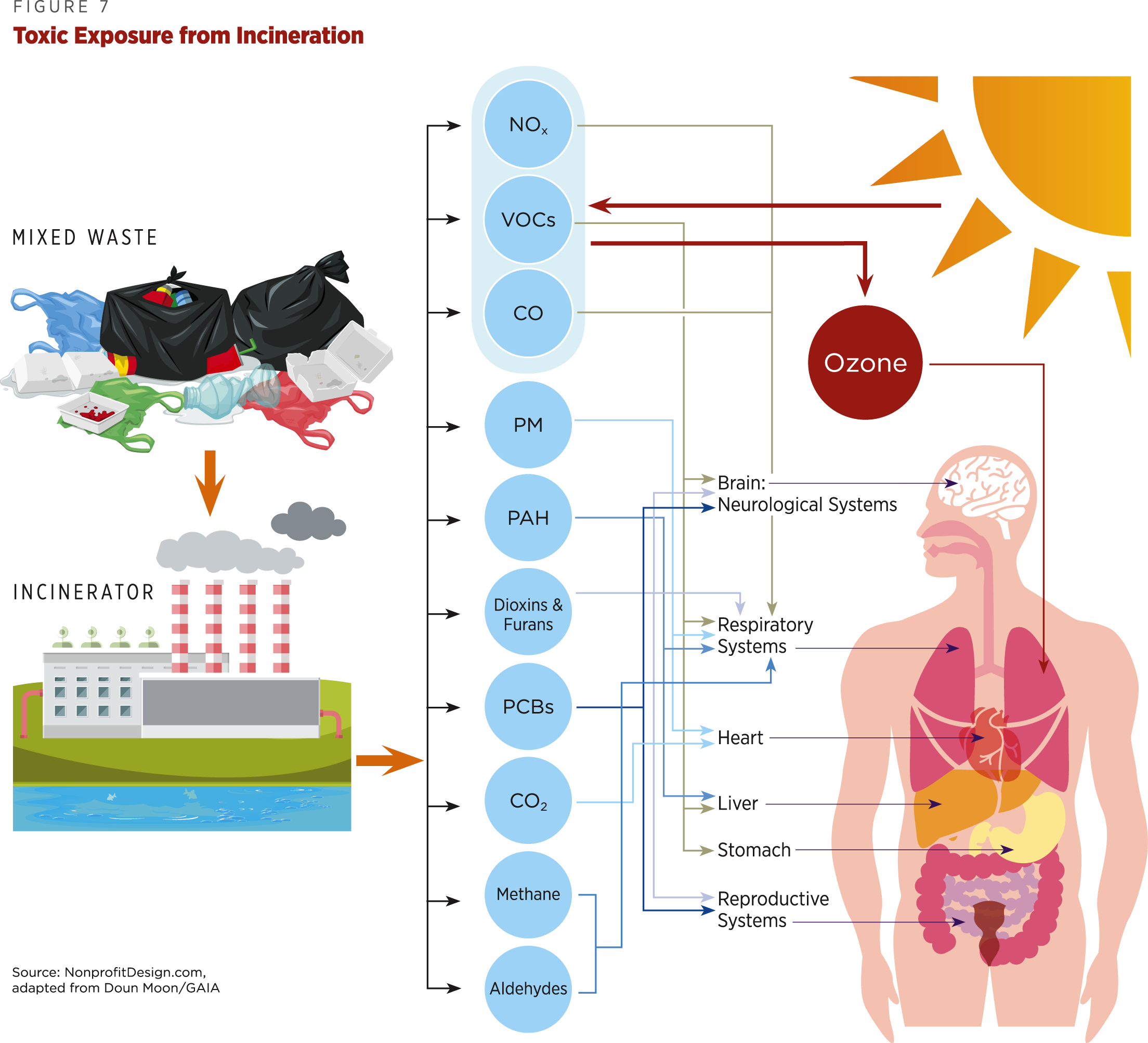