Arsenic (As) is a metalloid (exhibits metal and non-metal properties) found in a ubiquitous fashion within food, soil, various places in the environment, and water; the latter of which is the most prevalent vector for human exposure.1 Natural disasters, such as ocean volcanos/forest fires, as well as and oil/wood burning can disperse As throughout the environment.1(3) Other human derived activities such as improper sewage disposal, industrial activity (chemical/tannery/paint processes), and unregulated use of chemical fertilizers also contribute to As production and dissemination into populated regions.1(3) 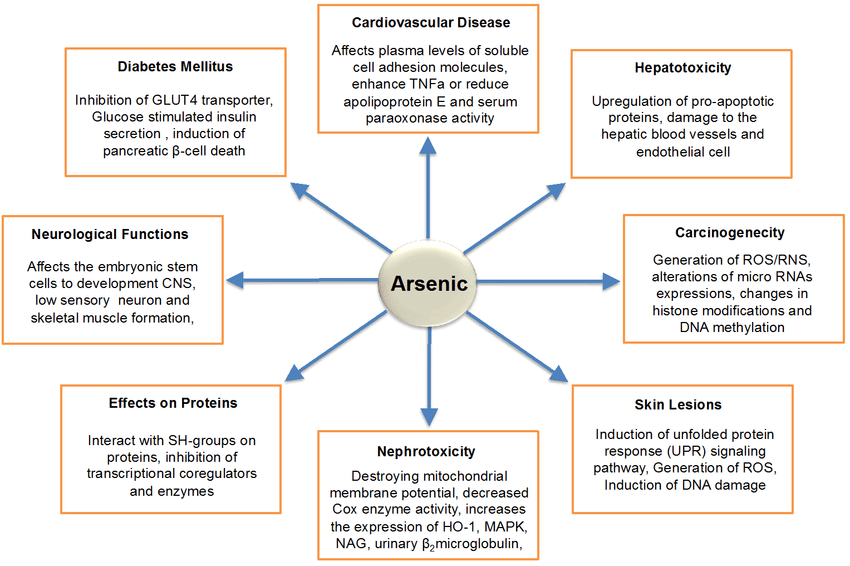 WHY DOES ARSENIC EXPOSURE MATTER?

At sufficient levels, As exposure has been linked to major diseases such as (but not limited to) neurodegeneration, hypertension, hyperkeratosis (thickening/bumpy skin), hepatotoxicity (liver damage) and cancer; the latter of which dominates in Newfoundland, holding the highest age standardized incidence rate compared to all other provinces in Canada.1(4),2

WHAT ARE THE MAJOR SOURCES OF CANCER IN NEWFOUNDLAND?

In Newfoundland, four environmental carcinogens have been identified: As and disinfection by-products in municipal drinking water, ultraviolet rays from the sun, agricultural chemicals (pesticides, fungicides, herbicides), and dust emanating from golf courses into nearby homes.2(77) As a compelling note, Canada restricted the use of agricultural chemicals on private and residential lands. However, an exemption was made for golf courses, who are permitted to use said chemicals at levels 4-7 times greater than agricultural farms use.2(78) 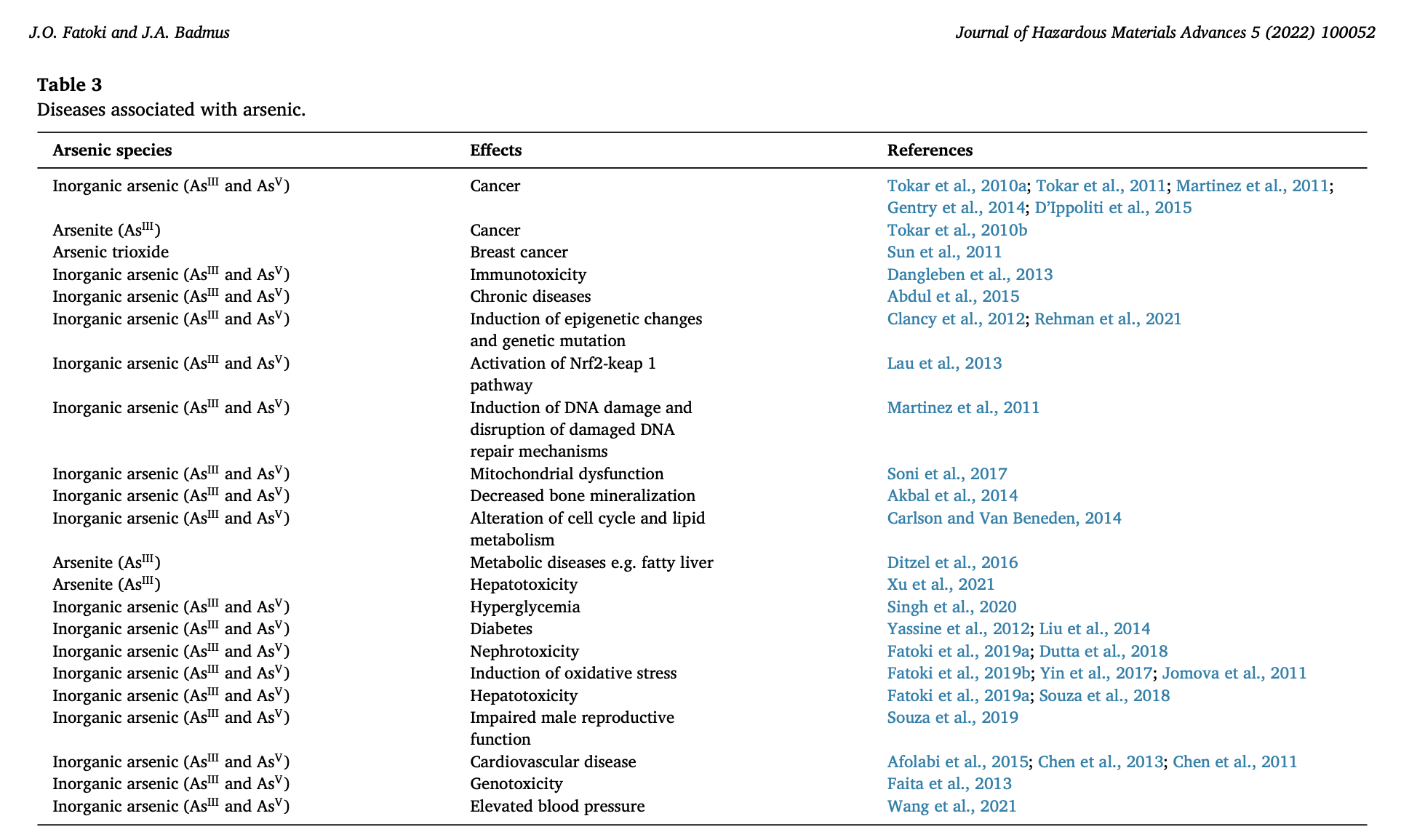 WHAT ARE SAFE DRINKING LEVELS?

Drinking water with As levels that exceed 0.010 mg/L in Newfoundland will require a second test to verify.3 Any drinking water with levels confirmed to have exceeded 0.010 mg/L is considered unsafe according to the World Health Organization (WHO).1(3) As is problematic in water (as arsenate and arsenite; see graphic below) as it is an odorless and tasteless substance, which has been unequivocally linked to increased incidence of lung, kidney, bladder, skin, and liver cancers.4 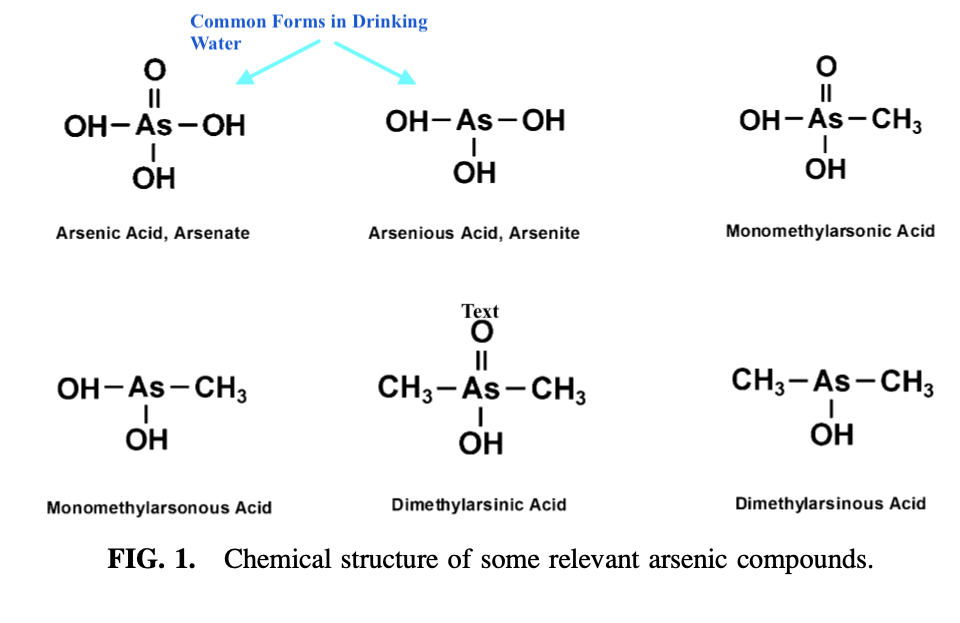 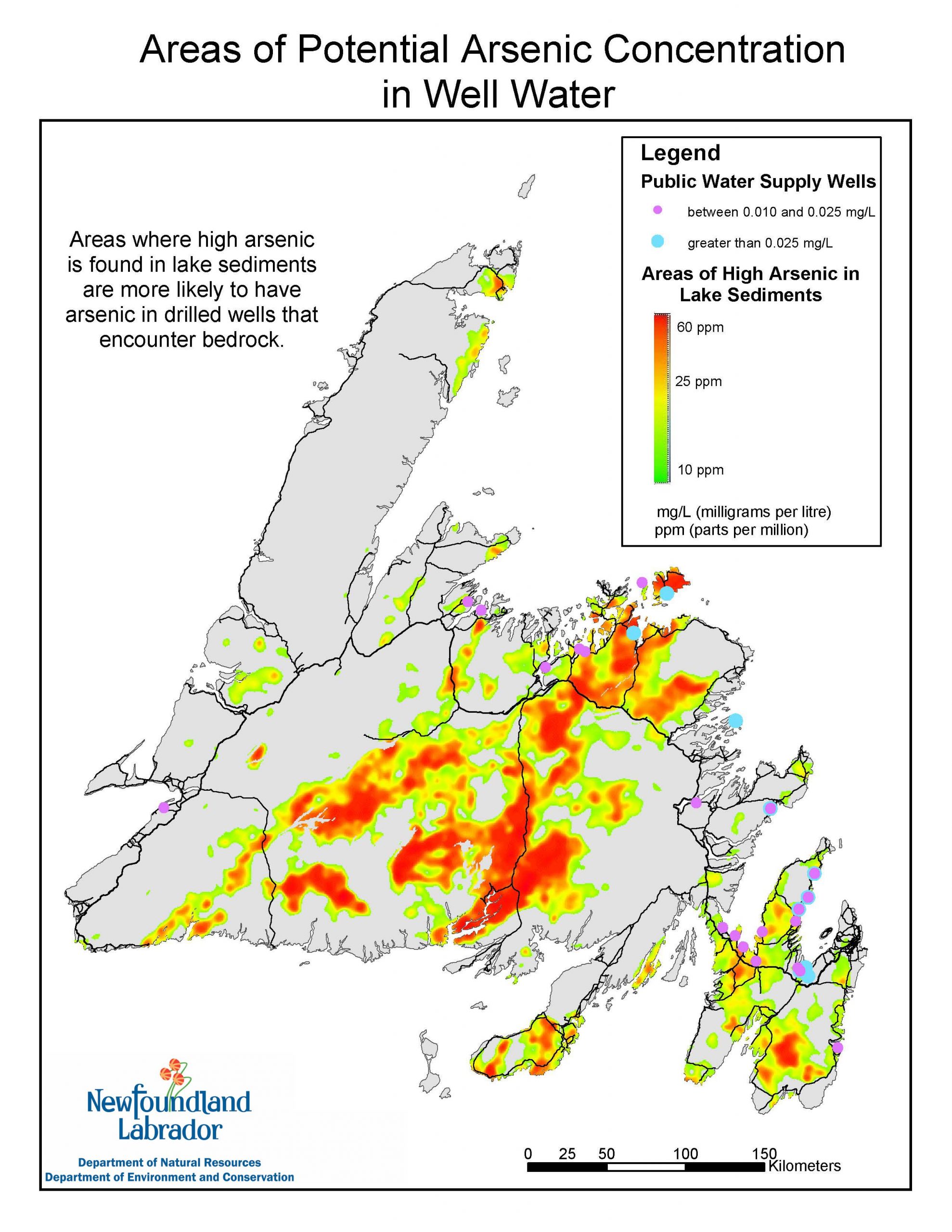 WHERE ARE THE HIGHEST POTENTIAL LEVELS OF ARSENIC IN NEWFOUNDLAND?

Please see the graphic above for potential distribution of As across Newfoundland. 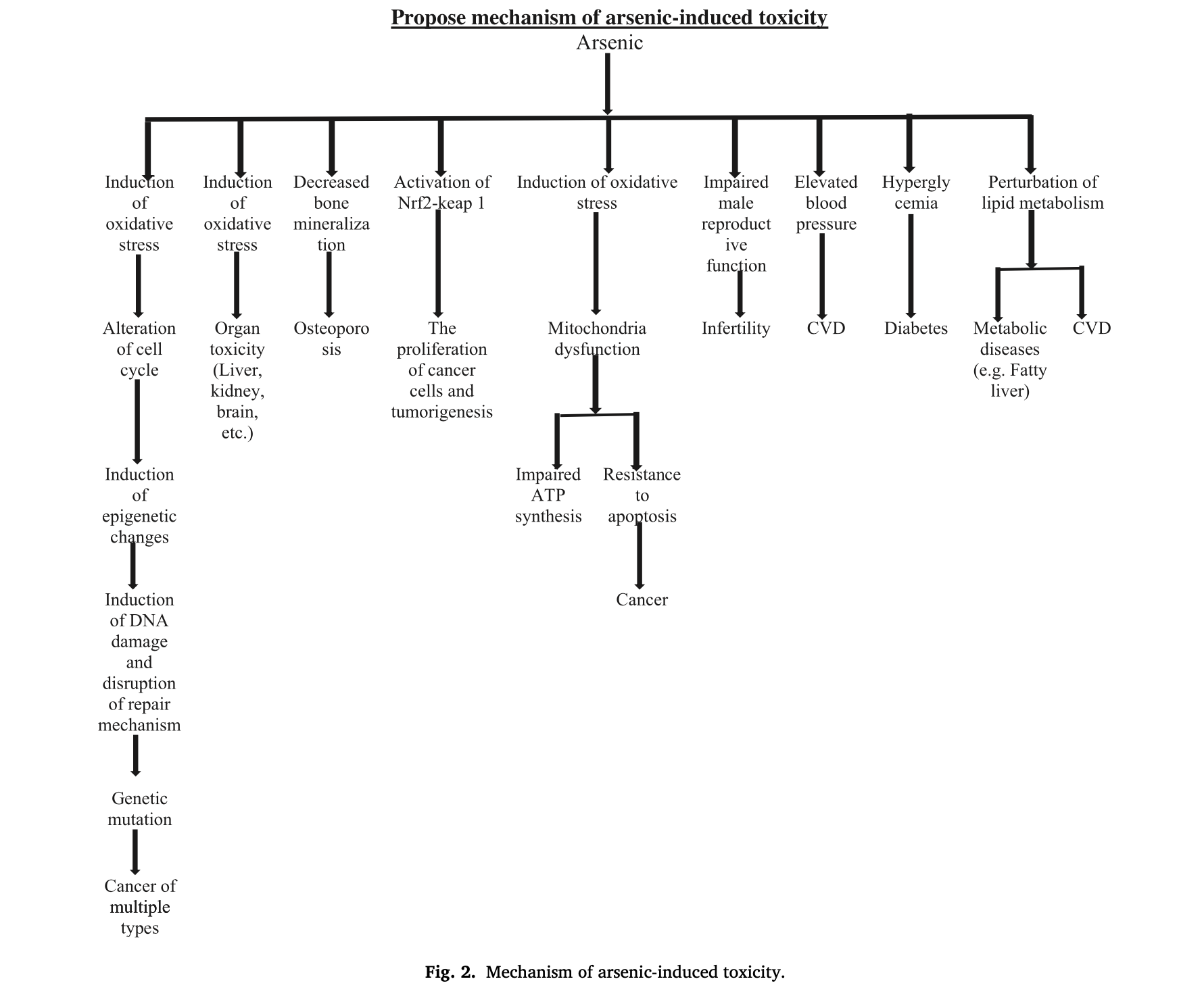 MECHANISMS OF ARSENIC DAMAGE TO THE HUMAM BODY

One dominant driver of damage from As is its ability to induce oxidation; a process in which As (via activation of NF-𝜅B; a pro-inflammatory factor) “steals” electrons from nearby cells and organelles (components inside cells).1(4) Such a biochemical process, when occurring at sufficient and uncontrolled levels (aka oxidative stress), destabilizes cells and cellular function.5 Ultimately, oxidative stress is a harmful process known to negatively affect lipoproteins, proteins, membrane lipids, and DNA.5(2) 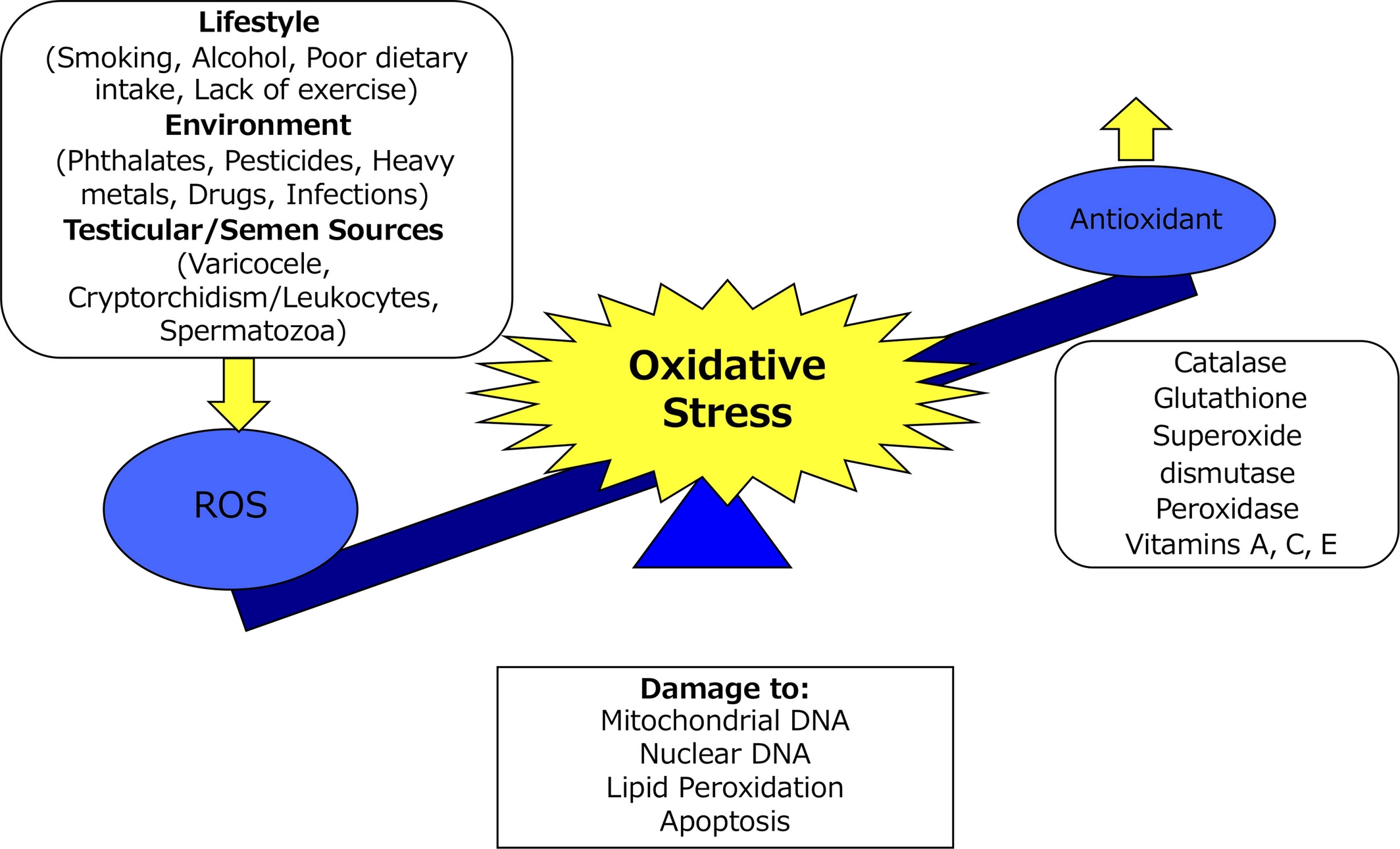 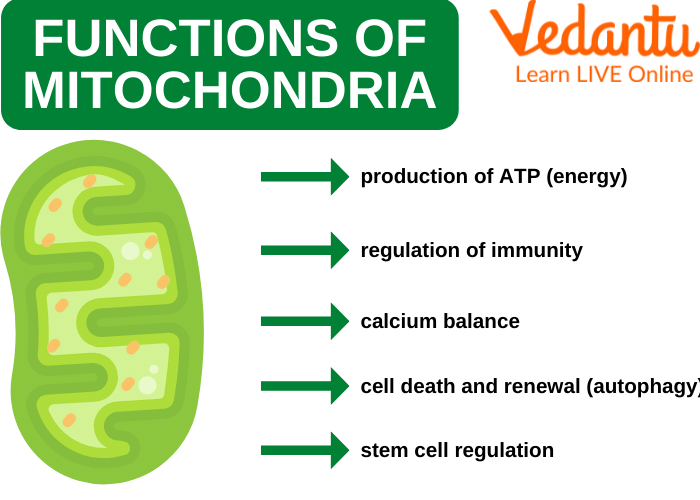 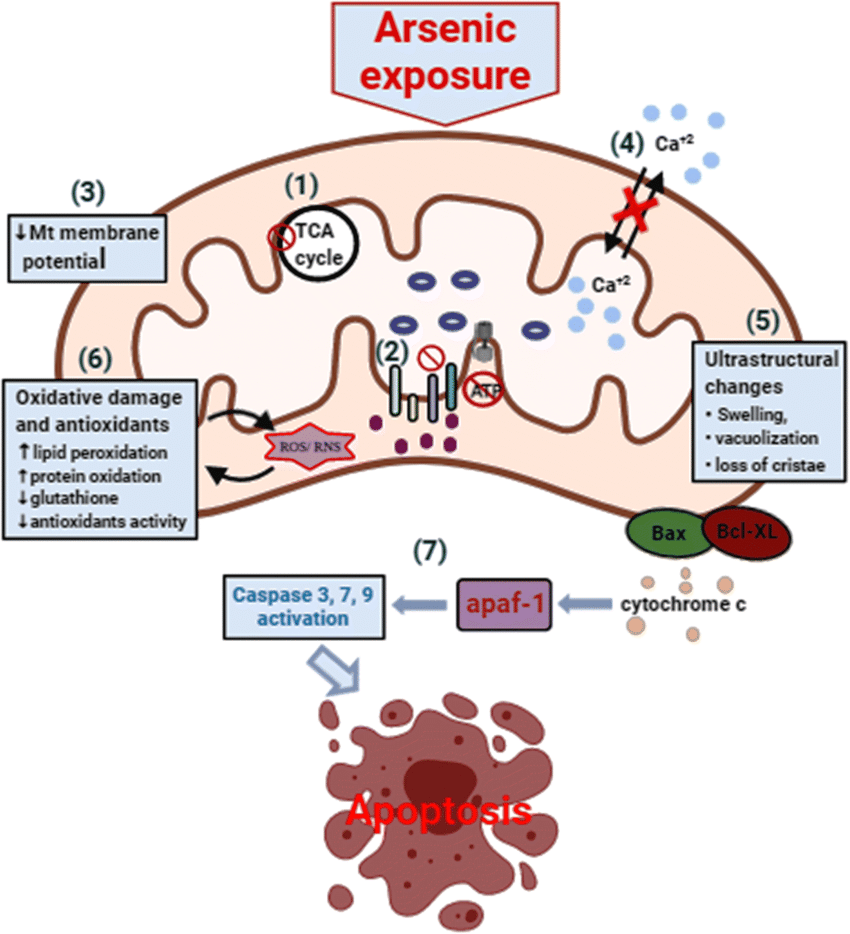 Fatoki and Badmus1(4) stated that As tended to inflict the bulk of its damage upon the mitochondria; an organelle, which plays several vital roles to human health and longevity.1(4) One major finding included the deterioration of membrane potential along the inner mitochondrial membrane space (location of electron transport chain; site of ATP production).1(4)

Over time, ATP production becomes compromised. However, and most relevantly, normal reactive oxygen species production (which creates oxidation as a byproduct) from ATP synthesis in the mitochondria is expected to increase from the presence and influence of As.1(4) Eventually, the antioxidant defence system becomes overwhelmed and exhausted leading to oxidative damage.1(5)

LINK: Mitochondria and Relationships to Health

OTHER SITES OF ARSENIC DAMAGE 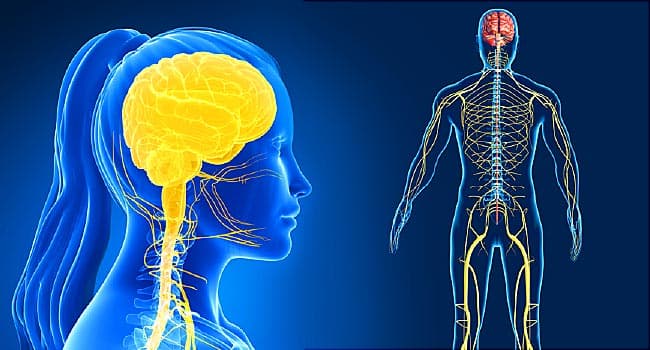 Although the mitochondria experience the bulk of damage from As, other sites become affected to include the neurological system.1(5) Several molecular mechanisms are thought to become disrupted to include excessive production of reactive oxygen species (produce oxidation and oxidative stress), DNA damage (mentioned previously), and changes in chromosome (harbours DNA) structure and function.1(5) Left unmitigated, such changes can manifest into cognitive and intellectual decline. 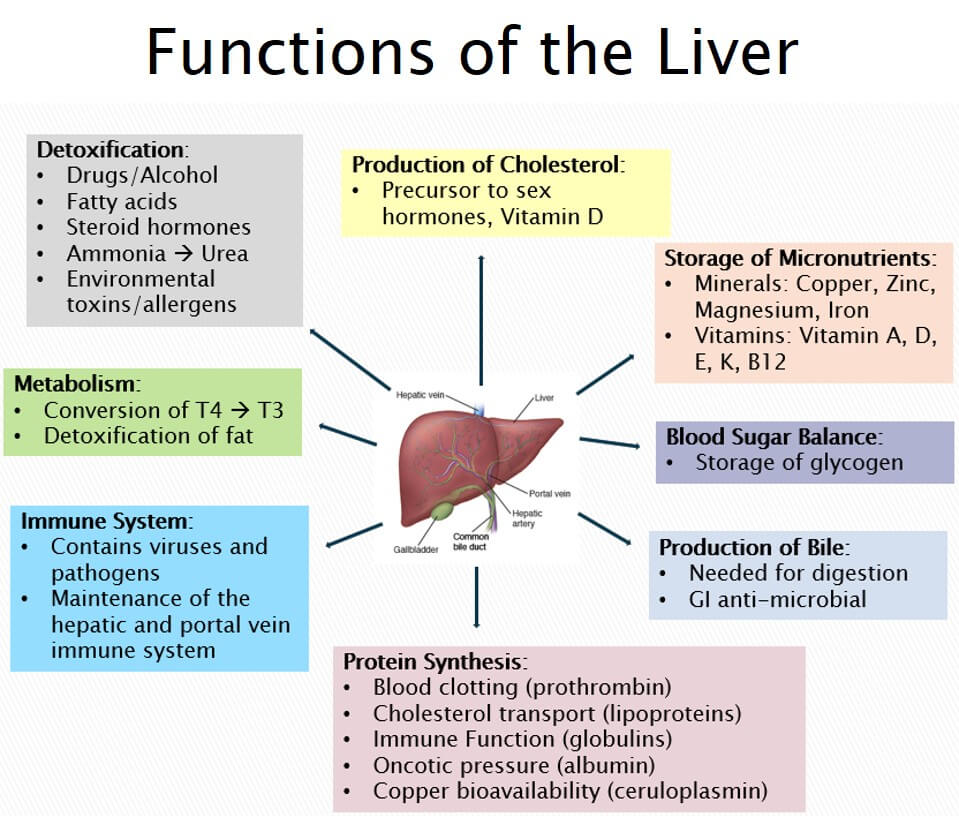 Another site negatively affected by As exposure would include the liver; an organ, which (among many other roles) manages, controls, and removes toxins from the body.1(6) Such is possible from the localisation and high density of xenobiotic (a foreign substance, like As) metabolizing enzymes.1(6) 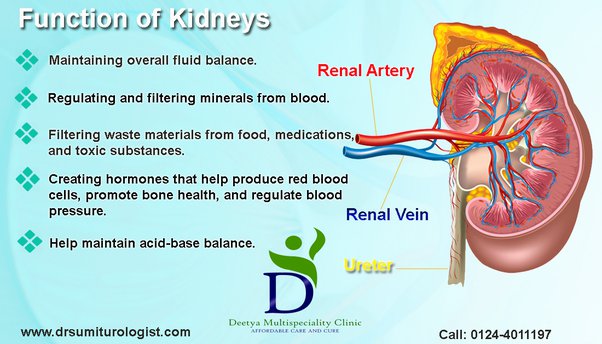 Considering that the liver “packages” As for removal from the body, the kidneys become a necessary route for such a process. Consequently, the renal system experiences an inevitable exposure to said metalloid.

When the kidneys contact As from contaminated drinking water, creatinine (waste product from muscle function) and urea (from liver; a waste product from protein metabolism) levels increase in the blood (from animal studies).1(7) Such is relevant as said markers should remain below range when the kidneys are functioning optimally; high levels indicate inefficient filtration.

Arsenic (As) is a metalloid (exhibits metal and non-metal properties) found in a ubiquitous fashion within food, soil, various places in the environment, and water; the latter of which is the most prevalent vector for human exposure. In Newfoundland, deep water wells may contain concentrations of As that are above safe levels. Considering the deleterious effects that As has upon cellular processes, and its links to cancer, I would urge Newfoundland home owners to strongly consider testing water for As.