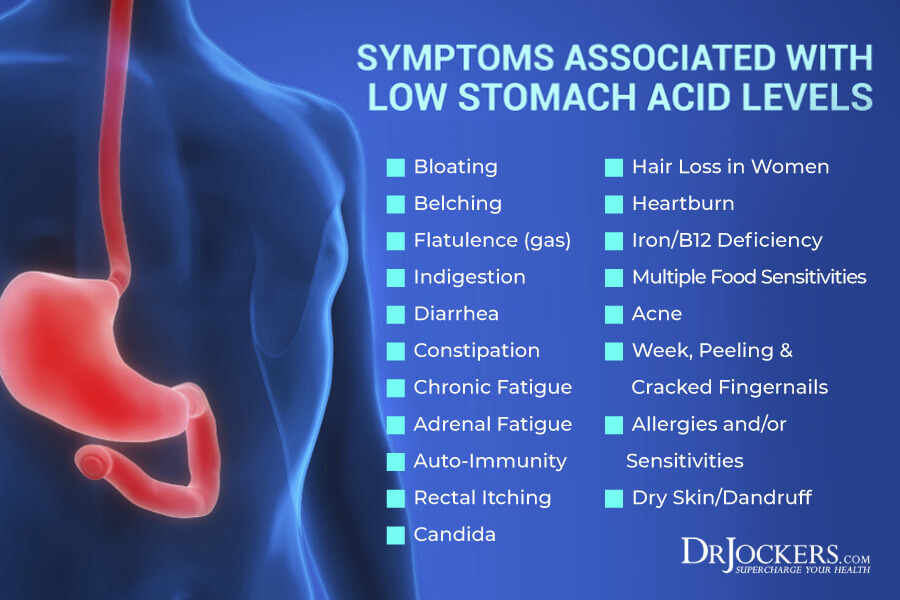 Optimal gastrointestinal (GI) digestion and absorption processes are essential in providing cells and tissues with usable forms of micronutrients. When functioning properly, the GI tract participates in maintaining and protecting health, performance, and longevity. However, when dysregulated, such a system can negatively affect homeostasis. One pathophysiological manifestation of the GI tract, known as hypochlorhydria (low stomach acidity/high pH), is related to several micronutrient malabsorption issues (Tamura et al., 2005). As a means of appreciating gastric function, the following will explore stomach acid production/function, causes/symptoms of dysregulation, and solutions to mitigate such a condition. 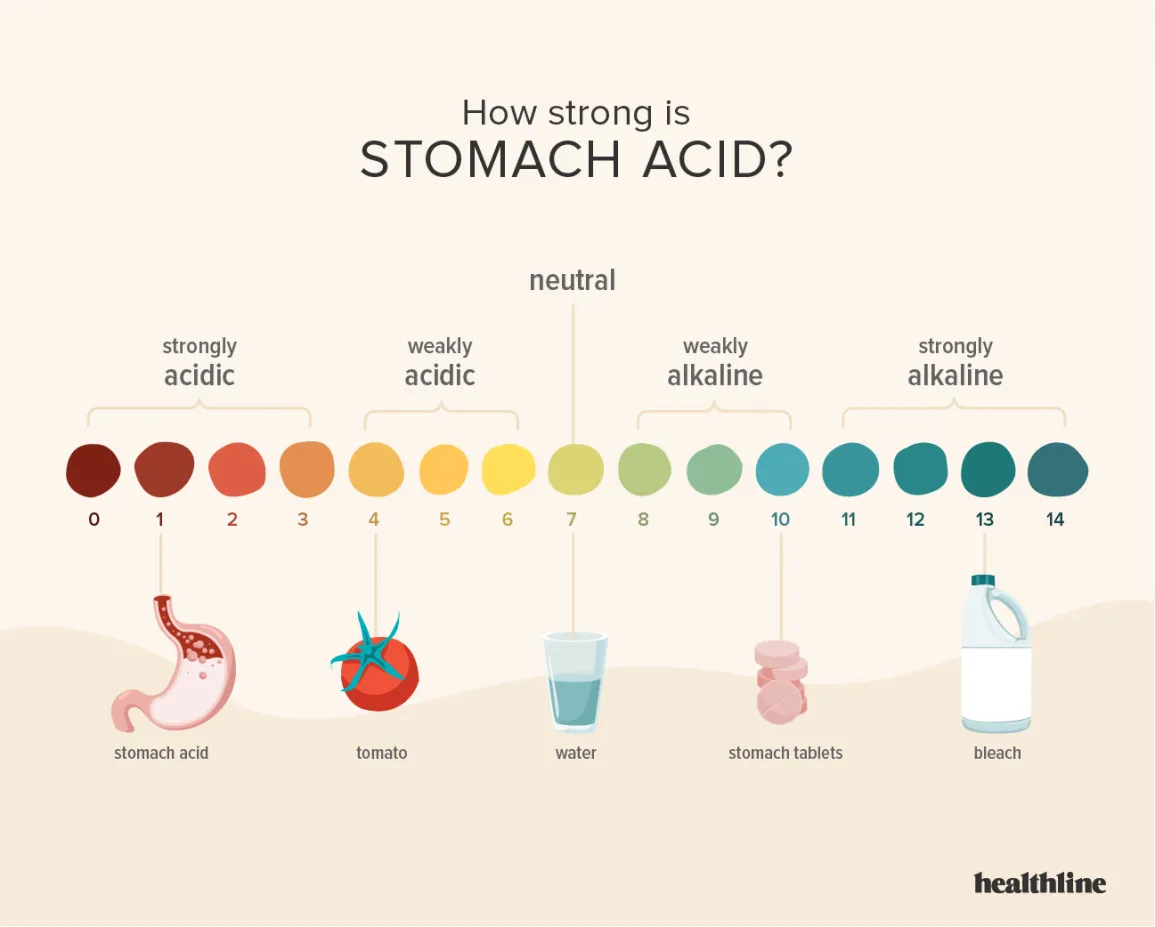 Lord and Bralley (2012) stated that the majority of GI medical treatments focus upon the stomach, indicating the prevalence of stomach conditions among the population. Proper stomach function is characterized by the appropriate output of stomach acid in the form of hydrochloric acid (HCL). HCL is a substance responsible for the breakdown of food (digestion) particles into forms that can pass through the enterocytes and into circulation (absorption) (Pizzorno & Katzinger, 2012). When functioning appropriately, HCL is released from parietal cells that line the stomach wall, producing approximately 1.5-2.5 liters of gastric juice per day (Pizzorno & Katzinger, 2012). For complete digestion and liberation of micronutrients from foods, stomach pH is tightly maintained to a level between 1 and 2 (Lord & Bralley, 2012; Pizzorno & Katzinger, 2012). Thus, any aberrations in HCL production and pH will hinder digestive and absorptive processes. 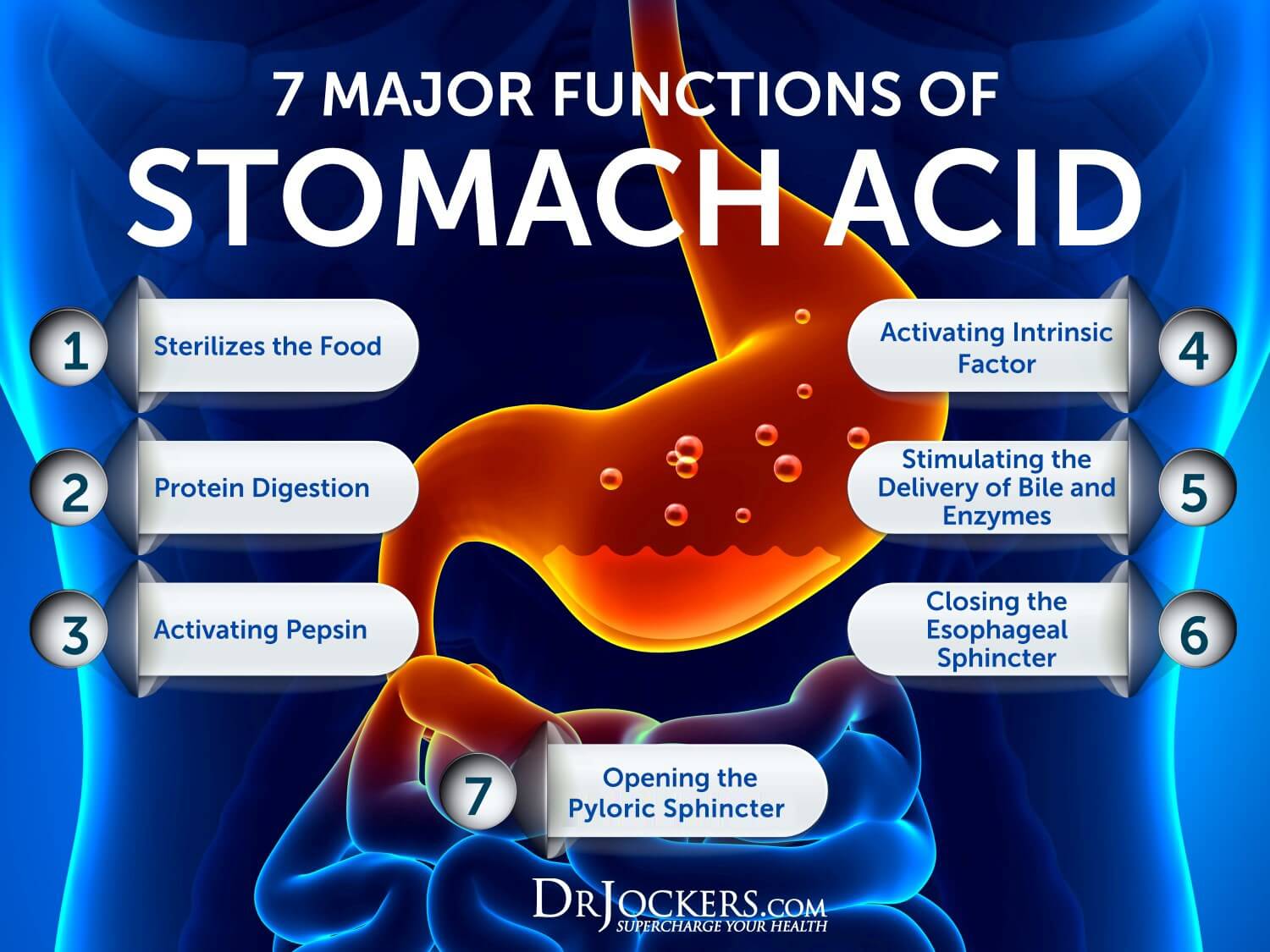 Lack of sufficient stomach acidity has been correlated with reduced vitamin and mineral absorption, food allergies, and reduced protein digestion (Pizzorno & Katzinger, 2012). Furthermore, low pH (high acidity) is a central line of defense against pathogens consumed from food. As such, maintenance of stomach acidity below 2 is essential in maintaining overall health and immune function. Such losses in low pH can be attributed to several causes including the use of proton pump inhibitors (increase pH or alkalinity), advanced age past 50 years (stomach acidity slowly declines), and bariatric surgery (removes part of the stomach) (Kenney, Wilmore, & Costill, 2012; Lord & Bralley, 2012;Pizzorno & Katzinger, 2012). Ultimately, such events (medication, aging, surgery) are likely to negatively influence stomach acidity. 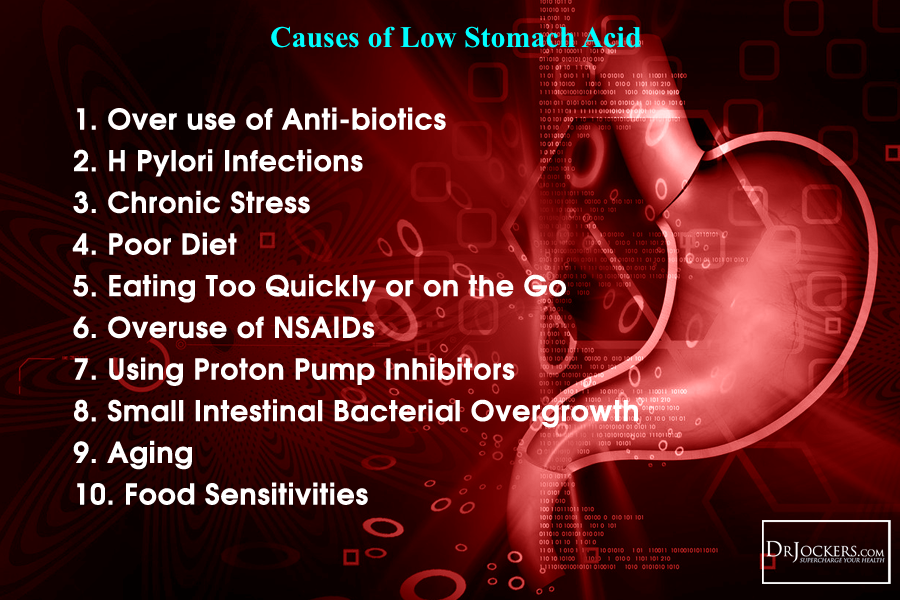 Symptoms of inadequate stomach acidity are often paralleled and mistaken for excessive stomach acidity/production known as hyperchloridria (Lord & Bralley, 2012). Upper abdominal sensations of burning and irritability are often found shortly after meals are consumed (Kines & Krupczak, 2016). With poor stomach acidity, food is regurgitated (pyloric valve does not readily open in the presence of high pH) into the esophagus inducing heartburn. As a consequence, antacids are prescribed to manage symptoms. However, such a process further deteriorates stomach acidity, compounding the symptoms and dysregulation of micronutrient digestion and absorption (Lord & Bralley, 2012). Since minerals and trace elements (i.e., chromium, copper, magnesium, manganese, potassium, selenium, vanadium, and zinc) are often bound to proteins, phosphates, ligands, and other organic acids, it is imperative that HCL concentrations and acidity are maintained to liberate micronutrients from said substances (Lord & Bralley, 2012;Pizzorno & Katzinger, 2012).

If an individual is presenting with symptoms of heartburn, stomach acid tests can be implemented that can help determine pH levels. One such test is the Heidelberg capsule test (Lord & Bralley, 2012). Though time consuming, the test takes approximately 90 minutes and is performed by swallowing a small pH probe. As the probe passes along the GI tract, readings are gathered regarding pH in different locations (i.e., small and large intestine if desired) to include the stomach (Lord & Bralley, 2012). Once baseline readings are gathered, a challenge solution of sodium bicarbonate (high pH/high alkalinity) is consumed to drastically increase stomach pH. If the parietal cells are functioning appropriately, they will rapidly increase stomach acidity (lower pH) within 20 minutes. If hypochloridria is present, reacidification of the stomach will require more than 20 minutes. Such a test can be repeated up to four times (Lord & Bralley, 2012). Furthermore, evaluations of micronutrients whose digestion and absorption are dependent upon high acidity (chromium, copper, magnesium, manganese, potassium, selenium, vanadium, and zinc) can be completed to corroborate findings from the Heidelberg capsule test. 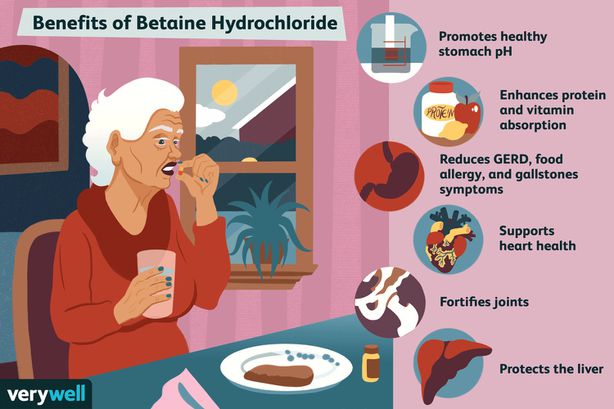 Once poor stomach acidity has been confirmed, removal of factors which are dysregulating stomach pH may be warranted (i.e., the use of antacids or proton pump inhibitors). Furthermore, interventions to decrease pH (increase acidity) might also be advised. Such interventions could include initiating oral HCL supplementation. Pizzorno and Katzinger (2012) suggested consuming one tablet (500-600 mg HCL) at one meal. If the HCL tablet does not exacerbate symptoms, the researchers suggested adding another tablet at every other meal remaining in that particular day (Pizzorno & Katzinger, 2012). If symptoms remain stable into the next day, Pizzorno and Katzinger (2012) recommended adding two tablets for the first meal (while monitoring symptoms), then adding tablets to the other meals for that day until a a total of 3,500-4,200 mg HCL/day has been achieved. If symptoms of stomach warmth begin, the researchers suggested that there may exist an excess of HCL, and to slightly reduce tablet consumption (i.e., reduce from 2/meal to 1/meal) until symptoms subside. As the parietal cells begin to produce HCL independent of the supplemental form, the researchers suggested that less exogenous HCL will be required (i.e., the sensation of warmth will occur from smaller doses of HCL). At such a time, supplemental HCL can be reduced or eliminated completely (Pizzorno & Katzinger, 2012).

In conclusion, aberrations in gastric function, to include suboptimal HCL production and acidity, provides fertile opportunities for dysregulation in micronutrient digestion and absorption. If individuals present with symptoms mentioned in previous sections, in conjunction to low levels of micronutrients (i.e., chromium, copper, magnesium, manganese, potassium, selenium, vanadium, and zinc), are of advanced age, and/or have a history of antacids/proton pump inhibitor use, such data should encourage health professionals to test for hypochloridria. If such a diagnosis is positive for low stomach acidity, reducing antacids/proton pump inhibitors and slowly increasing exogenous HCL consumption might be warranted.